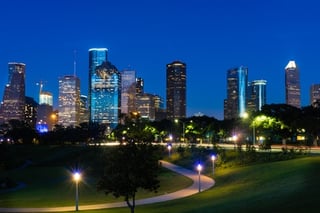 Would you believe that three Texas cities are in the top 5 of the 10 most moved-to cities in the U-Haul International Study of Migration Trends?

U-Haul International, the industry leader in do-it-yourself moving and self-storage, has tracked migration trends for years, in large part because of its expansive network over all 50 states. U-Haul destination cities are ranked according to the total number of arriving one-way U-Haul truck rentals to a city in the past calendar year.

We thought you would enjoy a look at the Top 10 Most Moved-to cities in the U.S.

10. Charlotte, North Carolina
As the largest city in the state of North Carolina, Charlotte is home to the corporate headquarters of Bank of America and Wells Fargo's online customer service branch. Notable sports attractions include the Carolina Panthers of the National Football League(NFL) and the Charlotte Hornets of the National Basketball Association (NBA).

Kansas City is the largest city in Missouri and the sixth largest city in the Midwest. It's particularly known for its cuisine — including its distinctive style of barbecue — and its craft breweries. In 2015, residents of Kansas City had an average travel time around 20 minutes; around 84% drove alone, with nearly 9% carpooling.

The City of Brotherly Love has come a long way since America's independence from Britain. The area's many universities and colleges make Philadelphia a top international study destination.

New Yorkers are too familiar with living on top of each other — and Brooklyn is no exception. As a premiere destination for hipsters, Brooklyn has felt its landscape change as gentrification continually alters its neighborhoods.

Las Vegas is known across the globe as a major hub of gambling, shopping, entertainment and nightlife. Self-styled as "The Entertainment Capital of the World," it's soon to become the home of the NFL's Las Vegas Raiders, who are scheduled to relocate from Oakland, Calif. after the 2018 season.

Although many perceptions about Texas have persisted throughout the years, the city of Austin stands apart from many areas of the state. Known for its diverse population, it is considered a liberal city in a conservative state. A number of Fortune 500 companies have headquarters or regional offices in Austin, including Google and Whole Foods Market.

Built on the success of Walt Disney World, Orlando has blossomed into a classic tourist destination. The city is one of the busiest U.S. cities for conferences and conventions. Orlando also is home to the University of Central Florida, which is the largest university campus in the U.S. in terms of enrollment as of 2015.

San Antonio's roots are tied to the military, and it continues to have a large military presence. Fort Sam Houston acts as the headquarters for the U.S. Army Medical Command as well as the home of the Fifth Army. It was the site of the Battle of the Alamo in 1836, and is now a museum in the Alamo Plaza Historic District.

The United States Automobile Association (USAA), founded by 25 Army officers in 1922, is headquartered in San Antonio and is known for its association with military members and their families.

The Windy City continues to sweep new residents to its bustling city; it was the number two U-Haul destination city in 2015. Notable landmarks include the Art Institute of Chicago and Millennium Park, among others.

Houston remains the number one U-Haul U.S. destination city for the eighth year in a row. Although Houston witnessed a 3.4% decline in 2016 arrivals compared to 2015, it continued to be the busiest domestic market for incoming U-Haul trucks.

"Houston is the country's No. 1 job creator," said Gabriel Mendieta, U-Haul Company of East Houston president. "This city is home to 24 Fortune 500 companies. The cost of living is low, and with low taxes, your paycheck goes further."

When you are planning a move, we hope that you will call us with your insurance questions.  We’re here to give you the information you need and solid advice.