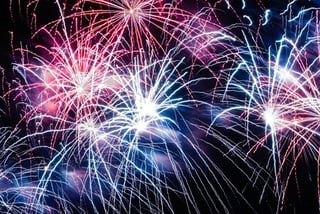 Celebrating the independence of our country has been an honored tradition since 1776.  Today we spend time with our families and friends eating barbeque and enjoying the fireworks.  We thought you might a short history of the holiday interesting.  Our friends at History.com have done a great job covering the people, facts, and background on our July 4th holiday.

The Fourth of July—also known as Independence Day or July 4th—has been a federal holiday in the United States since 1941.  The tradition of Independence Day celebrations goes back to the 18th century and the American Revolution.

Not surprisingly, the original intent of the Revolutionary War wasn’t necessarily a complete break with Great Britain.  In fact, those people who desired independence from England were considered radical.

On July 2nd, 1776, the Continental Congress voted in favor of independence, and two days later delegates from the 13 colonies adopted the Declaration of Independence, a historic document drafted by Thomas Jefferson.

By the middle of the following year, however, many more colonists had come to favor independence, thanks to growing hostility against Britain and the spread of revolutionary sentiments such as those expressed in the bestselling pamphlet “Common Sense,” published by Thomas Paine in early 1776.

On June 7, when the Continental Congress met at the Pennsylvania State House (later Independence Hall) in Philadelphia, the Virginia delegate Richard Henry Lee introduced a motion calling for the colonies’ independence.

John Adams believed that July 2nd was the correct date on which to celebrate the birth of American independence, and would reportedly turn down invitations to appear at July 4th events in protest. Adams and Thomas Jefferson both died on July 4, 1826—the 50th anniversary of the adoption of the Declaration of Independence.

On July 2nd, the Continental Congress voted in favor of Lee’s resolution for independence in a near-unanimous vote (the New York delegation abstained, but later voted affirmatively). On that day, John Adams wrote to his wife Abigail that July 2 “will be celebrated, by succeeding Generations, as the great anniversary Festival” and that the celebration should include “Pomp and Parade…Games, Sports, Guns, Bells, Bonfires and Illuminations from one End of this Continent to the other.”

On July 4th, the Continental Congress formally adopted the Declaration of Independence, which had been written largely by Jefferson. Though the vote for actual independence took place on July 2nd, from then on the 4th became the day that was celebrated as the birth of American independence.

The tradition of patriotic celebration became even more widespread after the War of 1812, in which the United States again faced Great Britain. In 1870, the U.S. Congress made July 4th a federal holiday; in 1941, the provision was expanded to grant a paid holiday to all federal employees.

We hope you have a wonderful 4th of July with your family and friends.  As always, we are here to answer your questions about your current insurance plans and any changes you are considering. Contact Us.