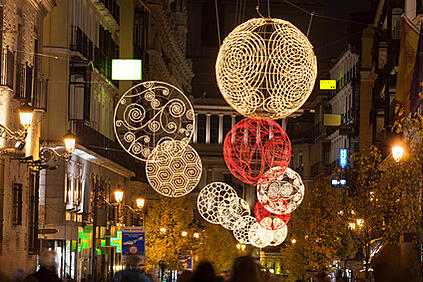 America has long been synonymous with religious freedom.   This diversity is clearly demonstrated by the array of spiritually significant celebrations around our country in December.  Nancy Haught and our friends at Huffington Post compiled a great list.

December 6, the Feast of St. Nicholas. Some Christians revere the fourth-century bishop of Myra, a Greek province in Asia Minor. His reputation for piety may have inspired the legend of Santa Claus. The tradition of leaving gifts for children on St. Nicholas Day began in the Low Countries and spread to North America with Dutch immigrants.

December 8, Bodhi Day. Buddhists recall that Siddhartha Gautama vowed to sit under a tree in what is now Bodhgaya, India, and not to rise until he was enlightened. The title Buddha means "awakened one."

Roman Catholics observe this day as the Feast of the Immaculate Conception, believing that Mary, the mother of Jesus, was born without sin.

December 12, the feast of Our Lady of Guadalupe. Observed by Catholics, especially those of Hispanic descent, the story of Guadalupe recounts a 16th-century apparition of Mary to Juan Diego, a poor Indian, on a hillside near what is now Mexico City.

December 17 - 24, the Jewish festival of Hanukkah begins at sunset on this date and continues for seven more nights. It is a remembrance of an effort to restore the Temple in Jerusalem after a period of desecration. Faithful Jews found only enough oil to light the temple lamp for one day, but the flame burned for eight.

December 21, Yalda, the Zoroastrian celebration of the winter solstice.  Yule or winter solstice, the shortest day in the Northern Hemisphere. Juul, a pre-Christian festival observed in Scandinavia, featured fires lit to symbolize the heat, light and life-giving properties of the returning sun. Wiccans and other pagan groups celebrate Yule.

December 25, Christmas, observed by Christians since the Middle Ages as the birth of Jesus. Some Orthodox Christians follow a different calendar, and Christmas may fall on a different date.

December 26, Zoroastrians observe the death of the prophet Zarathushtra, known in the West as Zoroaster. Tradition says he lived in what is now Iran in about 1200 B.C. His teachings include the idea of one eternal God; seven powerful creations: sky, water, earth, plants, animals, humans and fire; and that life is a struggle between good and evil.

December 26 is also the starting date for Kwanzaa, a weeklong, modern African-American and pan-African celebration of family, community and culture. For some people who keep Kwanzaa, the festival has spiritual overtones in its emphasis on imani, Swahili for "faith."

We wish you and yours the warmth and wonder of the season.  May 2015 be a year of prosperity, joy, kindness, and peace.