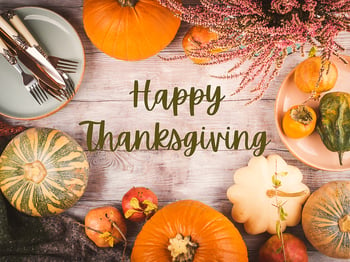 While Thanksgiving may look a bit different in 2020, we have discovered some history and traditions that will no doubt carry on.

The famous pilgrim celebration at Plymouth Colony Massachusetts in 1621 is traditionally regarded as the first American Thanksgiving.  However, there are actually 12 claims to where the "first" Thanksgiving took place: two in Texas, two in Florida, one in Maine, two in Virginia, and five in Massachusetts.

As a nation, the U.S. has celebrated Thanksgiving off and on since 1774.  In 1789 George Washington made a proclamation that the American people should celebrate a day of thanksgiving on November 26th.  In 1863, Lincoln proclaimed a day of Thanksgiving on the last Thursday of November that became an annual holiday.  The date was changed to the fourth Thursday in November under President Franklin D. Roosevelt.

John F. Kennedy was the first president on record for unofficially sparing a turkey in 1963.  It wasn't until the Reagan administration in 1987 that a turkey was given an official presidential pardon.  Despite it being a joke, the turkey was spared and put in a petting zoo.  In 1989 George H. Bush made it an annual Thanksgiving event and each president following him has carried on the tradition.

The turkey's tryptophan doesn't actually make you tired.  The holiday bird isn't to blame, either. The reason you can't imagine doing anything else but watching football on the couch is just because you over-ate.

A whopping 68% of Americans dislike Thanksgiving dishes like canned cranberry sauce, pumpkin pie, and even turkey itself according to a 2019 Instacart survey of more than 2,000 U.S. adults conducted online by The Harris Poll – but they still eat them in honor of tradition. Times are changing, however: 30% of Thanksgiving dinner hosts have served something other than turkey as their main course. Pork is the second most popular option.

In 1955 the green bean casserole was created by the Campbell Soup Company and more specifically Dorcas Reilly.

Pumpkin pie was a staple on New England Thanksgiving tables as far back as the turn of the 18th century. Legend has it that the Connecticut town of Colchester postponed its Thanksgiving feast for a week in 1705 due to a molasses shortage. There could simply be no Thanksgiving without pumpkin pie.

Cranberries were eaten by Native Americans and used as a potent red dye, but the sweetened cranberry relish was almost certainly not on the first Thanksgiving table. Marcus Urann canned the first jellied cranberry sauce in 1912 and eventually founded the cranberry growers cooperative known as Ocean Spray.

The winning combo for football and Thanksgiving kicked off way before there was anything called the NFL. The first Thanksgiving football game was a college match between Yale and Princeton in 1876, only 13 years after Lincoln made Thanksgiving a national holiday. Soon after, Thanksgiving was picked as the date of the college football championships. By the 1890’s thousands of college and high school football rivalries were played every Thanksgiving.

While 2020 is a truly unusual year, we would like to remind you that staying safe is a good priority for this holiday. Our circumstances will certainly change for next year and hopefully return to celebrating with large groups of people who are important to us.