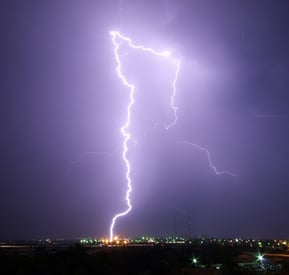 The recent storms in southeast Texas have given us all a new respect for lightning and possibly brought up some thoughts about insurance coverage for both home and business.

Just how much lightning are we talking about?  Thanks to its location on the Gulf Coast, Texas is among the world's hot spots for lightning strikes.  And Houston is the lightning center of Texas, recording about 1,700 strikes in June and July each year, according to research at Texas A&M University.

According to the National Oceanic and Atmospheric Administration, NOAA, lightning results from the buildup and discharge of electrical energy between positive and negatively charged areas. Most lightning deaths or injuries occur when people are on a golf course, near water, or standing under trees for shelter. The late afternoon or early evening hours during the summer are the most common times for lightning casualties nationwide, but they can occur just about any time of year near the Gulf coast. The Gulf coast has the highest incidences of lightning strikes annually throughout the U.S.  For more information from NOAA,click here.

Texas A&M University has installed a Lightning Mapping Array, LMA, around the Houston.  Twelve sensors are distributed around the Houston metropolitan area in order to provide total lightning data for the fourth most populated American city.

The primary research goals of the network are to investigate the structure of total lightning within thunderstorm development and to examine any potential impact of the urban environment on lightning characteristics. Furthermore, the proximity to the coast and the Gulf of Mexico presents the opportunity to examine the total lightning structure within tropical cyclones that impact the southeast Texas coastline. The availability of real-time LMA data additionally provides a decision support tool for advanced warning of thunderstorm development.  To see real time LMA maps of the Houston area, click here.

With the explosion in the number and value of consumer electronics in homes, such as flat screen TVs, home entertainment centers, multiple computers, gaming systems and other expensive devices, it is more important than ever to take precautions.

The Insurance Information Institute offers the following tips to protect homes and businesses against power surges and lightning strikes:

The system includes a lightning rod or air terminals at the top of the house that can be disguised to look like a weather vane and wires to carry the current down to grounding rods at the bottom of the house.

According to the Institute for Business & Home Safety (IBHS), the lightning protection system needs to be securely anchored to the roof; otherwise it may whip around in a storm and damage the building. So make sure to have a licensed electrician install your lightning rod and protection system.

Use surge protectors. Today’s sensitive electronic equipment is particularly vulnerable to lightning. To assure the highest level of protection, UL-listed surge arrestors should be installed on electrical service panels. Installations typically include surge arrestors for the main electric panel, as well as incoming phone, cable, satellite and data lines.

Wondering if your insurance policy covers lightning strikes?  We would be happy to have a conversation with you to answer your questions.

Dean & Draper is a Trusted Choice insurance agency representing over 200 insurance companies. For over 35 years we have offered a trusted freedom of choice to our clients.  ContactUs.