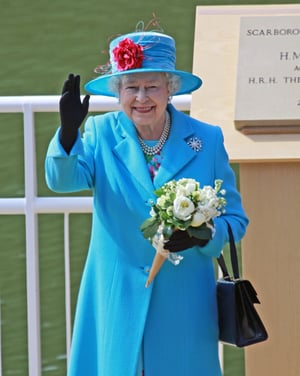 Reflecting on the sad, negative, and shattering news of this week, we decided that we are due for some good, uplifting, exciting news.  The past couple of days have seen the U.S. going into space again.  Yes!  That touched off some research for the good news below.

At the age of 93, Queen Elizabeth II of Britain has made a notable sartorial statement by removing real fur from her day-to-day wardrobe.

The move was revealed by her senior dresser, Angela Kelly. “If Her Majesty is to attend an engagement in particularly cold weather, fake fur will be used to make sure she stays warm,” she says.

A hairstylist in Denver, CO was left in tears after a customer tipped her $2,500 before leaving another $3,300 for salon staff who were just returning to work after closure due to the coronavirus pandemic.

The Golden Labrador Who Keeps on Giving

Stumpy is a handsome labrador who was destined for a career as a guide dog. Sadly, problems with a deformed leg meant it wasn’t going to be. But then Stumpy found a new way to help others: by giving blood.

The nine-year-old labrador has saved more than 100 canine lives since the age of one by donating blood for emergency transfusions.  [Source: Daily Mail, BBC News]

A father whose dad walked out on his life when he was just 12 years old launched a YouTube channel where he makes instructional videos on basic tasks that everyone should know how to do.

In 6 short weeks, more than 1.7 million people subscribed to his channel.  Rob Kenney launched the channel "Dad, How Do I?" on April 1, 2020. He releases a new video every week teaching young adults how to do basic tasks like changing a tire on a car, how to unclog a sink, and how to iron a dress shirt.

Copenhagen is bolstering its ambition to become the world’s first carbon-neutral city by 2025 after opening a 41,000-square-metre waste-to-energy plant which also boasts a year-round artificial ski slope on top.

The Copenhill power plant can convert 440,000 tons of waste into energy, delivering electricity and district heating for 150,000 homes. The rooftop ski slope runs for 400 metres from the top of the 90-metre-high building, with a 180-degree turn halfway down the piste. [Source: Dezeen]

A 23-year-old British design graduate has invented a biodegradable material made from fish waste that could one day replace plastic in packaging.

Lucy Hughes (above) used fish offcuts to develop a strong, flexible and translucent material called MarinaTex, which looks and feels like plastic but can be disposed of as compostable food waste. [Source: Dezeen/The Guardian]

As well as selling flatpack furniture, Ikea’s store in Catania, Sicily, provides an unusual service. It welcomes stray dogs off the street, feeding them and allowing them to curl up and nap among the store’s living room displays.

The practice is popular with customers, who include local shop owner Giovanna Pecorino. “I know those dogs well,” she says. “I love them. They give me a sense of peace.” The strays are cared for by a local animal welfare group and some dogs have even been adopted by customers and found a permanent home.

Lego has unveiled a project to help blind and visually impaired children learn Braille in a “playful and engaging way” amid concerns that fewer children are learning the system because of audiobooks and computer programs.

Its new “Braille Bricks” will be moulded with the same studs used for letters and numbers in the Braille alphabet. They will also feature printed characters to allow sighted teachers and family to read them.

There’s good news for art lovers, with the announcement by Florence’s Bargello Museum that the public may finally be allowed to see sketches by Michelangelo on the walls of a secret room that has remained private since its discovery 40 years ago. The room, beneath the Medici Chapels in the city’s Basilico di San Lorenzo, could be opened to visitors before the end of next year.

Our plan is for these snippets of good news will lift your spirits – they did for us.  When you want more good news about your insurance, give us a call.

Dean& Draper is a Trusted Choice insurance agency representing over 200 insurance companies. For over 36 years we have offered a trusted freedom of choice to our clients.  ContactUs.