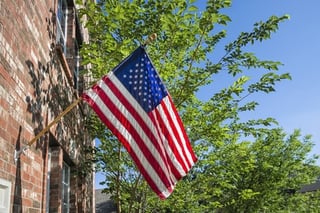 We all think of the 4th of July as the day to celebrate American’s birthday.  The idea of an annual day specifically celebrating the Flag is believed to originated in 1885.  On the 108th anniversary of the official adoption of the Stars and Stripes, B. J. Cigrand, a school teacher in Fredonia, Wisconsin, arranged for the pupils to observe June 14 as the first Flag Day.

Magazine and newspaper articles over the following years, create celebrations in 1889 in New York City, in 1891 the Betsy Ross House in Philadelphia head a Flag Day celebration, and in 1892 the New York Society of the Sons of the Revolution also celebrated Flag Day.

In 1893 the adaptation of Flag Day expanded in Philadelphia when the Pennsylvania Society of Colonial Dames of America adopted a resolution requesting the mayor of Philadelphia and all other in authority along with private citizens display the Flag on June 14th.  Historian Colonel J. Granville Leach went on to recommend that atherafter the day be known as “Flag Day” with school children assembles and given a small Flag.  Two weeks later, Dr. Edward Books, the Superintendent of Public Schools of Philadelphia, directed that Flag Day exercises be held on June 14, 1893 in Independence Square.

In 1894, the governor of New York directed that on June 14 the Flag be displayed on all public buildings. On June 14th, 1894, under the auspices of the American Flag Day Association, the first public school children's celebration of Flag Day in Chicago was held in Douglas, Garfield, Humboldt, Lincoln, and Washington Parks, with more than 300,000 children participating.

Flag Day - the anniversary of the Flag Resolution of 1777 - was officially established by the Proclamation of President Woodrow Wilson on May 30th, 1916. While Flag Day was celebrated in various communities for years after Wilson's proclamation, it was not until August 3rd, 1949, that President Truman signed an Act of Congress designating June 14th of each year as National Flag Day.

Tips for Flying the Stars and Stripes

Traditional guidelines call for displaying the flag in public only from sunrise to sunset. However, the flag may be displayed at all times if it’s illuminated during darkness. The flag should not be subject to weather damage, so it should not be displayed during rain, snow and wind storms unless it is an all-weather flag. It should be displayed often, but especially on national and state holidays and special occasions.

We’re flying our Stars and Stripes on Wednesday, June 14 and hope that you will join us in celebrating our Flag.  When you have questions about personal or commercial insurance, we invite you to contact us.