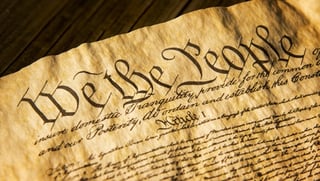 The Constitution of the United States was signed on September 17, 1757 in the Pennsylvania State House where the Declaration of Independence was signed. Our country has certainly seen some changes since the original version was written and yet, the wisdom of our country’s founders remains solid.  Please join us in taking a moment to celebrate the day that our Constitution was signed.

The National Archives comments on the Constitutional Convention and results.

“The Constitution acted like a colossal merger, uniting a group of states with different interests, laws, and cultures. Under America’s first national government, the Articles of Confederation, the states acted together only for specific purposes. The Constitution united its citizens as members of a whole, vesting the power of the union in the people. Without it, the American Experiment might have ended as quickly as it had begun.”

“One of the fiercest arguments was over congressional representation—should it be based on population or divided equally among the states? The framers compromised by giving each state one representative for every 40,000 people in the House of Representatives and two representatives in the Senate.”

“After three hot summer months of equally heated debate, the delegates appointed a Committee of Detail to put its decisions in writing. Near the end of the convention, a Committee of Style and Arrangement kneaded it into its final form, condensing 23 articles into seven in less than four days.”

The oldest person to sign the Constitution was Benjamin Franklin (81). The youngest was Jonathan Dayton of New Jersey (26).

George Washington and James Madison were the only presidents who signed the Constitution.

Written in 1787, the Constitution was signed on September 17th. But it wasn’t until 1788 that it was ratified by the necessary nine states.

The original Constitution is on display at the National Archives in Washington, D.C. When the Japanese bombed Pearl Harbor, it was moved to Fort Knox for safekeeping.

More than 11,000 amendments have been introduced in Congress. Thirty-three have gone to the states to be ratified and twenty-seven have received the necessary approval from the states to actually become amendments to the Constitution.

We invite you to take a moment today to remember those extraordinary men who came together 230 years ago to write our constitution.  When you have questions about your insurance please give us a call.  We want to provide you with great information to help you make your insurance decisions.