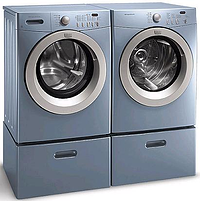 An estimated 2,900 clothes dryer fires in residential buildings are reported to U.S. fire departments each year and cause an estimated $35 million in property losses, according to a new government report.

The report by the U.S. Fire Administration (USFA) said that 84 percent of clothes dryer fires took place in residential buildings.

Also, according to the report:

Damaging fires can occur if clothes dryers are not properly installed or maintained.

The report notes that lint, a highly combustible material, can accumulate both in the dryer and in the dryer vent. Accumulated lint leads to reduced airflow and poses a fire hazard.  Reduced airflow can also occur when foam-backed rugs or athletic shoes are placed in dryers.

Small birds or other animals nesting in dryer exhaust vents is another hazard. A compromised vent will not exhaust properly, possibly resulting in overheating and/or fire.