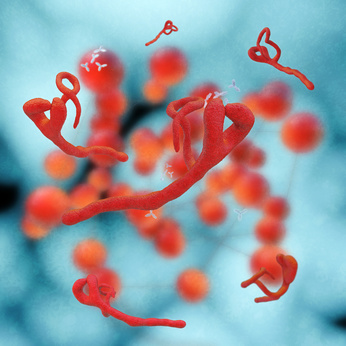 With the first U.S. case of Ebola virus just up the road in Dallas, we’re all getting jumpy about this deadly disease.  So, how prepared is Houston in case the virus spreads?

"We spent a fair amount of time developing this strategy to identify and safely treat at-risk patients," said Dr. Kenneth Mattox, chief of staff at Ben Taub General Hospital. "We are dependent on individuals to follow all the steps and exercise proper judgment, but the protocol is in place to make sure no Ebola patient is prematurely discharged."

Mattox said the need to follow the protocol is critical because it could be easy to confuse Ebola symptoms with those of so many other, less deadly conditions. He said Ebola symptoms are identical to those of 20 other diagnoses, such as malaria, dengue fever, West Nile and the flu.

Dr. Thomas Geisbert, an Ebola expert at the University of Texas Medical Branch at Galveston, said that the miscue in Dallas likely will put hospitals in Houston and throughout the country on alert and make it less likely the incident will be repeated.

Houston health officials were quick to note that U.S. hygienic conditions and infection control procedures would prevent any rapid or sustained transmission of Ebola here.

CDC Responds to the 2014 Ebola Outbreak

As Center for Disease Control experts work 24/7 in response to the Ebola Outbreak in Guinea, Liberia, Sierra Leone, and Nigeria, they support the response in many different capacities. In an effort to get the worst Ebola outbreak in history under control, CDC is not only providing guidance to healthcare professionals but traveling back to West Africa to focus on stopping the spread of the disease.  To see their individual stories, click here  .

How is Ebola Transmitted?

According to the World Health Organization (WHO), Ebola is spread through direct contact with the bodily fluids of infected animals and humans.

“It is thought that fruit bats of the Pteropodidae family are natural Ebola virus hosts. Ebola is introduced into the human population through close contact with the blood, secretions, organs or other bodily fluids of infected animals such as chimpanzees, gorillas, fruit bats, monkeys, forest antelope and porcupines found ill or dead or in the rainforest."

"Ebola then spreads through human-to-human transmission via direct contact (through broken skin or mucous membranes) with the blood, secretions, organs or other bodily fluids of infected people, and with surfaces and materials (e.g. bedding, clothing) contaminated with these fluids."

"Health-care workers have frequently been infected while treating patients with suspected or confirmed EVD. This has occurred through close contact with patients when infection control precautions are not strictly practiced.”

To see the complete WHO Ebola Fact Sheet, click here.

Melissa Hillebrand not only covers the scary facts about Ebola in her October 1, 2014 article for PropertyCasulaty360, 30 Ebola Facts That Will Make You Cringe, Plus 7 Ways to Manage the Risk, she also discusses the insurance risks in the areas of General Liability – alleged negligence in exposure for customers or employees; Workers Compensation – exposure due to business travel; and Property/Business Interruption – due to temporary facility closures.  To read the entire article, click here.

We invite you to call or contact us if you have questions about your insurance or getting additional specialized coverage.