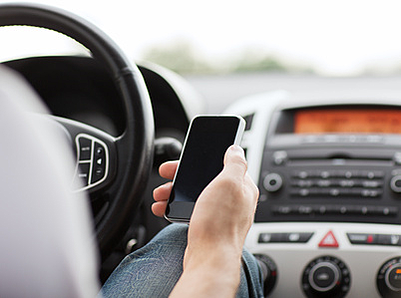 We’ve all done it.  While we’re driving we hit those keys on our phones sending emails, texts, or making a call.  Most of us have been really lucky and haven’t had a wreck or injured anyone.  We don’t realize that sending or receiving that text takes our eyes off of the road for about 4.6 seconds.  That doesn’t seem long until you realize at 55 miles per hour it’s just like driving the length of a football field blindfolded.

Texting while driving a vehicle has now replaced drinking while driving as the leading cause of accidents and deaths of teenage drivers.  Research done in 2012 by Texas A&M University’s Center for Transportation Safety found that 1 in 10 Texas drivers were talking on a phone, texting, or using some other electronic device while driving.  Texting drivers are 23 times more likely to be involved in a crash than non-texting drivers.

The National Highway Traffic Safety Administration (NHTSA) reports that of 33,561 traffic fatalities nationwide in 2012 (the most recent statistics available), 3,328 were caused by distracted driving including talking or texting while underway.

So, what can each of us do to make our roads safer?  Since 47% of adults admit to texting while driving, what if we simply waited until we’re safely stopped to play with our technology?  There isn’t a call, text, or email that’s important enough to risk injuring yourself or those around you.

Teens, inexperienced drivers, and even experienced ones may need to be reminded to refrain from calling, texting, and emailing while driving.  Not surprisingly, there’s an app for that – several in fact.  In January Jeff Ehling with Channel 13 reported on distracted driving and evaluated three cell phone apps.  Click the link to see the complete story. http://abclocal.go.com/ktrk/story?section=news/consumer&id=9415194

How about making a pledge to stop being a distracted driver?  Facebook is doing its part to provide an opportunity to get serious.  The link will take you to the Facebook pledge page.  https://www.facebook.com/PledgeNowTXTL8R

For parents and business owners alike, a device that blocks phone activity – except emergency calls – could be the answer.  Many devices are flexible on which activities are restricted as well as provide additional tracking information.

If you cannot devote your full attention to driving because of some other activity, it’s a distraction. Take care of it before or after your trip, not while you’re behind the wheel.

Dean & Draper is a Trusted Choice insurance agency representing over 200 insurance companies. For over 33 years we have offered a trusted freedom of choice to our clients.  Contact Us.