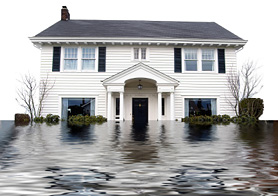 There are few points in U.S. history when floods and the havoc they wreak have garnered more attention than over the past decade. In 2005, Hurricane Katrina put New Orleans underwater. More recently, Hurricane Sandy revealed how vulnerable New York City is to storm-based flooding. And while both cities do abut large bodies of water, the risk they face is not unique: Since Katrina and before Sandy, numerous flood events have occurred elsewhere in the United States, including the noncoastal middle of the country.

Of course, most individuals and companies that own coastline property understand the risks of building a residence or business structure near a body of water the size of the Atlantic Ocean or the Gulf of Mexico. But people and firms expose themselves to the increased possibility of flood damage just by owning a property near a lake, a river or flood plain. Indeed, the destruction that occurs when water is whipped by hurricane-strength winds can reach far inland. Just ask the homeowners who live 50 miles from Manhattan and had flooded basements and water pouring through damaged roofs, compliments of Sandy.

Consider this revelation from the federal website floodsmart.gov: In February 2010, over two years before hurricane Sandy, the website reported that floods are the most destructive of all natural disasters in the United States, causing more than $2.4 billion of property damage every year.

So given the ubiquity of floods thus far in the 21st century, and a prediction by weather experts that wet-weather events will increase in the coming decade, the question seems to be not whether you should have flood insurance on your homes and businesses, but how much.

In 1968, the U.S. Congress created the National Flood Insurance Program (NFIP) in an effort to make available hard-to-get coverage that was affordable and unavailable in the commercial marketplace. In fact, if you live or operate a business in a high-risk flood zone, but your community has taken measures to protect against future floods, you may qualify for NFIP. That’s the good news. The bad news, particularly for premium-priced high net worth residences, is the NFIP’s coverage levels.

To make the math easy: Subtract $250,000 from the replacement value of your home and the difference is the amount you will have to come up with out of pocket in the event of a total loss. Even if the destruction is not total, for a beachfront home valued at, say, $1 million, a Katrina or Sandy would easily do a lot more than $250,000 worth of damage.

In short, while you should take advantage of the NFIP program if it is available, to fully protect your investment we suggest you supplement NFIP with excess flood insurance coverage, which offers limits as high as $15 million. Excess flood insurance also provides replacement costs for damaged property and possessions. Think of it this way: In a high net worth household, just one painting damaged or destroyed by flooding could equal the NFIP total of $100,000.

In sum, as with any insurance, determining whether your flood insurance is “sufficient” begins with finding out your current level of coverage. If it is not enough to rebuild your home and replace the items within it, an excess flood insurance policy will fill the gap.