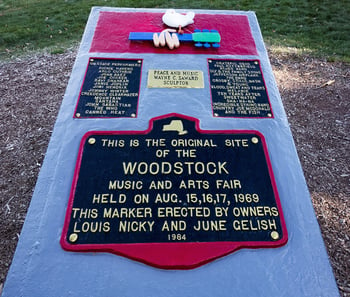 Just in case this ultimate counterculture love-in is before your time, we thought beginning with an overview of the Woodstock Music and Art Fair would be appropriate.

During the weekend of August 15 – 18, 1969, nearly 500,000 people descended on the dairy farm of Max Yasgur in Bethel, New York.  Entertainers included Jimi Hendrix, The Who, Santana, Janis Joplin, Creedence Clearwater Revival, Sly and the Family Stone and more.  As the sun rose on the third morning, the event was firmly etched in rock lore.

Woodstock was sponsored by four men – John Roberts, Joel Rosenman, Artie Kornfeld and Michael Lang – and ultimately cost more than $2.4 million. The oldest of the four was 26.

Max Yasgur, owner of a 600-acre dairy farm, rented is land for the festival.  Originally, he attempted to herd his dairy cows into a fenced pasture.  After festival goers cut the fencing, Yasgur allowed the cows to roam with the visitors.

Less than two years after the festival, Yasgur sold the farm. In 1973, he died of a heart attack, aged 53. Rolling Stone accorded him a full-page obituary, one of the few non-musicians to receive such a tribute.

Woodstock was originally intended as a profit-making venture. It only became a free festival when it became apparent the gig was attracting hundreds of thousands more people than the organizers had readied themselves for. The final straw was when the fence was torn down by desperate swarms of ticketless fans.

The Who, Janis Joplin and The Grateful Dead all refused to play on the Saturday night until they were paid in advance by cash.

John Roberts used his trust fund as the heir to a pharmaceutical fortune as leverage to get a local bank to open on Saturday night and provide them with a loan. By the end of the event, the organizers were millions of dollars in debt.

To help cope with the unprecedented numbers, 346 off-duty New York City policemen were drafted in at $50 per day each, along with 100 local sheriffs, several hundred State Troopers and deputies from 12 counties.

Members of the New Mexico commune, the Hog Farm, were hired by the organizers to act as the “Please Force.”  Their leader, Wavy Gravy, walked around dressed as Smokey the Bear and threatened any troublemakers with pies in the face or being doused in fizzy water.

The organizers had trouble nailing down food supply before the festival. They eventually went with concession workers from Food for Love, but they had little experience with large events.  At one point, according to Smithsonian Magazine, they jacked the prices of their burgers and hot dogs from 25 cents to a dollar each. Attendees were so outraged by the wait and price that they burned the stand down.

There was an average wait of two hours to make a phone call. On the first day alone, over half a million long-distance calls were made.

The traffic jam on the main road leading into the site was 17 miles long. The Washington Post reported the hippy trail as “the most patient traffic jam” the Catskills had ever seen.

Given the volume of traffic, it took an insane eight hours for commuters to drive the 98 miles from New York City to Bethel.

Eighteen doctors and 36 nurses treated a total of 5,162 festival patients, according to a Health Department report released in October 1969. The report listed 797 documented cases of drug abuse.

We hope that you enjoyed our tour of little-known facts about Woodstock.  We invite you to call when you have questions about your insurance.  We’re here with the answers.