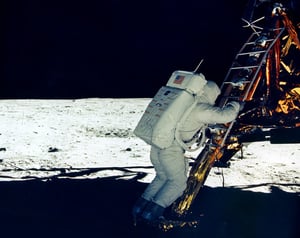 Some of us have stunning memories of the first Moon landing on July 20, 1969.  We were a part of the 600 million people worldwide who watched that jaw dropping first step on the Moon live on television.  For the rest of us, the celebration of that first Moon walk 50 years ago is a great opportunity to experience a look at those films, tapes, documents, and books which tell the story of the first people on the Moon.

Landing on the Moon seemed next to impossible when Dwight D. Eisenhower first conceived the idea.  President John F. Kennedy in an address to Congress on May 25, 1961 declared the national goal to be “landing a man on the Moon by the end of this decade and returning him safely to the Earth.”

Kennedy inspired our country in September 1962 when he visited Houston and delivered his famous speech at Rice University.

The Apollo program was the third United States human spaceflight program carried out by the National Aeronautics and Space Administration (NASA) and succeeded in landing the first humans on the Moon from 1969 to 1972.

President Kennedy's goal was accomplished on the Apollo 11 mission when astronauts Neil Armstrong and Buzz Aldrin landed their Apollo Lunar Module (LM) on July 20, 1969, and walked on the lunar surface.  Michael Collins remained in lunar orbit in the command and service module (CSM).  All three landed safely on Earth on July 24. Five subsequent Apollo missions also landed astronauts on the Moon, the last in December 1972.

Alan Shepard was the oldest person to walk on the Moon, at age 47 years and 80 days. Charlie Duke was the youngest, at age 36 years and 201 days.

During the next week we hope that you will take advantage of the array of Moon Walk celebrations in our city.  When you want to talk about your insurance, we will be here with the answers.