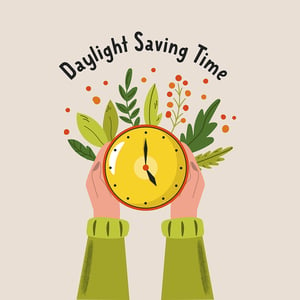 Yes, we just “fell back” four months ago. Which brings up that we are actually on “real” time one-third of the year and the artificial “spring” time two-thirds of the year. The official date to spring forward is at 2:00AM on Sunday, March 14, 2021. BTW, the official name for this time change is “Saving” without the “s” that most of us add to it.

There's an age-old myth that Daylight Saving was a practice adopted to give farmers extra time in the sun to work out in the field. Famers fought proposals to implement DST due to the changes they found in productivity. One agriculture lobby argued to repeal the act in 1919.

World War I led to adoption of DST

Attitudes changed after World War I broke out. The government and citizenry recognized the need to conserve coal used for heating homes. The Germans were the first to officially adopt the light-extending system in 1915, as a fuel-saving measure during World War I. This led to the introduction in 1916 of British Summer Time: From May 21 to October 1, clocks in Britain were put an hour ahead.

The United States followed in 1918, when Congress passed the Standard Time Act, which established the time zones. However, this was amidst great public opposition. A U.S. government Congressional Committee was formed to investigate the benefits of Daylight Saving Time. Many Americans viewed the practice as an absurd attempt to make late sleepers get up early.

Does DST save energy?

Reports are mixed. A California Energy Commission study concluded that extending DST had little or no effect on energy consumption. A U.S. Department of Energy report found a decrease in energy use per day of extended DST, but only by 0.5 percent.

March 19, 1918 - The Standard Time Act establishes time zones and daylight saving. Daylight saving is repealed in 1919 but continues to be recognized in certain areas of the United States.

1966 - The Uniform Time Act of 1966 establishes the system of uniform Daylight Saving Time throughout the United States. The dates are the last Sunday in April to the last Sunday in October. States can exempt themselves from participation.

August 8, 2005 - President George W. Bush signs the Energy Policy Act of 2005 into law. Part of the act will extend Daylight Saving Time starting in 2007, from the second Sunday in March to the first Sunday in November.

2007 - Under the new laws, all of Indiana now observes Daylight Saving Time, where only certain areas of the state did before.

Health effects of the time change

The grumpiness you may feel is not just your imagination. The DST effect on your sleep patterns can last for several days.

“Ever since the institution of daylight saving time, there has been controversy regarding whether it accomplishes its goals or not, and it so at what cost,” Timothy Morgenthaler, Mayo Clinic’s co-director of the Center for Sleep Medicine, said in a 2018 USA Today interview.

Gaining or losing an hour will likely affect sleep patterns, often for about five to seven days, Morgenthaler said. The most notable changes are in those who regularly do not get enough sleep. People who are sleep deprived might struggle with memory, learning, social interactions, and overall cognitive performance.

Here we are, heading into 8 months of “springing forward.”  Enjoy the sunshine!  We invite you to let us know when you have questions about your insurance. We’re only a phone call away.

The recommendation(s), advice and contents of this material are provided for informational purposes only and do not purport to address every possible legal obligation, hazard, code violation, loss potential or exception to good practice. Dean & Draper Insurance Agency specifically disclaims any warranty or representation that acceptance of any recommendations or advice contained herein will make any premises, property or operation safe or in compliance with any law or regulation. Under no circumstances should this material or your acceptance of any recommendations or advice contained herein be constru

ed as establishing the existence or availability of any insurance coverage with Dean & Draper Insurance Agency. By providing this information to you, Dean & Draper Insurance Agency does not assume (and specifically disclaims) any duty, undertaking or responsibility to you.  The decision to accept or implement any recommendation(s) or advice contained in this material must be made by you.