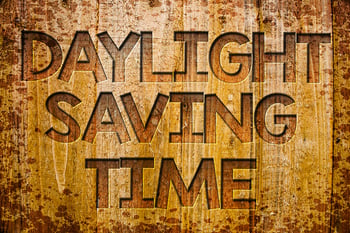 Here we are again, changing our clocks and adjusting to yet another time change.  We decided to look into the history of Daylight Saving Time (DST) along with a few of the facts in this week’s blog.  In a side note, most of us call it “Savings” time erroneously.

There's an age-old myth that Daylight Saving was a practice adopted to give farmers extra time in the sun to work out in the field. Famers fought proposals to implement DST due to the changes they found in productivity.  One agriculture lobby argued to repeal the act in 1919.

In 2008, the US Department of Energy found that the four-week extension of DST from April-October to March-November saved about 0.5 percent in total electricity every day. While that seems like almost nothing, it totals 1.3 billion kilowatt-hours and the DOE says that adds up to "the amount of electricity used by more than 100,000 households for an entire year."

But a study that same year by the National Bureau of Economic Research concluded that DST increases the demand for electricity -- even though lighting usage reduced, demand for heating and cooling increased, so electricity consumption was about the same.

March 19, 1918 - The Standard Time Act establishes time zones and daylight saving. Daylight saving is repealed in 1919 but continues to be recognized in certain areas of the United States.

1966 - The Uniform Time Act of 1966 establishes the system of uniform Daylight Saving Time throughout the United States. The dates are the last Sunday in April to the last Sunday in October. States can exempt themselves from participation.

August 8, 2005 - President George W. Bush signs the Energy Policy Act of 2005 into law. Part of the act will extend Daylight Saving Time starting in 2007, from the second Sunday in March to the first Sunday in November.

2007 - Under the new laws, all of Indiana now observes Daylight Saving Time, where only certain areas of the state did before.

Health Effects of the Time Change

The grumpiness you may feel is not just your imagination.  The DST effect on your sleep patterns can last for several days.

“Ever since the institution of daylight saving time, there has been controversy regarding whether it accomplishes its goals or not, and it so at what cost,” Timothy Morgenthaler, Mayo Clinic’s co-director of the Center for Sleep Medicine, said in a 2018 USA Today interview.

Gaining or losing an hour will likely affect sleep patterns, often for about five to seven days, Morgenthaler said. The most notable changes are in those who regularly do not get enough sleep. People who are sleep deprived might struggle with memory, learning, social interactions and overall cognitive performance.

Like it or not, we’re into a short four months of “standard” time.  We’re also just a phone call away when you have questions about your insurance.

Storm And Weather TopicsWhy Do I Need Business Insurance?