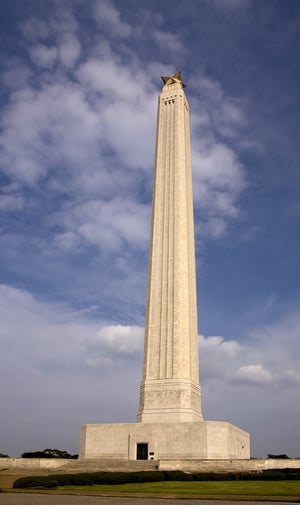 This day in history, April 21, is especially important to Texas and Texans.  We thought a look at the battle for Texas independence would be an interesting side trip for our blog.

The Battle of San Jacinto

On April 21, 1836 Texas earned independence from Mexico in the Battle of San Jacinto.  Following the fall of the Alamo and the Texan’s defeat at Goliad, Sam Houston deliberately let himself run out of territory at San Jacinto.  With his 918 troops, Sam Houston set up camp with his back to the river and the bayou.

In the Battle of San Jacinto, certain details such as the exact size of the Mexican army estimated at 1,200 are unclear.  Also unclear is how the Texas army of almost 918 at mid-afternoon on a bright, sunny day could walk across almost a mile of open grassland and take a veteran force by complete surprise.

The Yellow Rose of Texas

Enter Emily West.  Santa Anna was otherwise occupied at the moment of attack. The reason for his occupation? A beautiful, young woman of mixed white and black ancestry .  Emily West was sent into the Mexican camp by General Sam Houston on a mission to distract the Mexican president. Like most of the legends surrounding the Texas Revolution the story of Emily West, also known as The Yellow Rose of Texas, is based on evidence but has taken on a life of its own over the years.

A large part of the Mexican army was never able to form or fight at all.  Retreating in a panic, hundreds of soldiers found their retreat blocked by a steep ravine or bayou.

The Texans lost two killed in action and about 30 wounded, seven of whom would die.  Sam Houston also reported more than 700 Mexican prisoners of war and 630 Mexican dead – numbers that exceeded the figures on the Mexican army rolls.  What was clear was the Mexican army was demoralized and routed while the victors emerged almost unscathed.

For several decades, official British policy was to maintain strong ties with Mexico in the hopes that the country could stop the United States from expanding further.  In 1840, after years in which the Republic of Texas was neither annexed by the United States nor reabsorbed into Mexico, Britain signed a treaty to recognize the nation and act as a mediator to help Texas gain recognition from Mexico.

The United States voted to annex Texas as the 28th state in March 1845.  Two months later, Mexico agreed to recognize the Republic of Texas as long as there was no annexation to the United States.  On July 4, 1845, Texians voted for annexation.

Thanks for joining us for a look at an important date in Texas history.  When you have questions about your insurance, we have great answers.