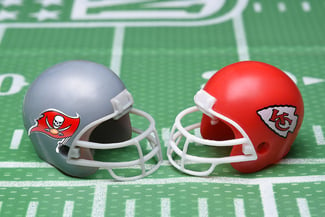 It’s Super Bowl LV. It’s different from the rest in so many ways, some related to Covid-19 and some firsts that have nothing to do with the pandemic. Here’s our list of Super Bowl firsts.

The Buccaneers are the first team in NFL history to play a Super Bowl in their own stadium. Raymond James Stadium, their home since 1998, has hosted two Super Bowls before, in 2000 and 2008.

Raymond James Stadium, which typically accommodates 65,618 fans, will be capped to a capacity of 22,000 due to COVID-19.

Brady's matchup with Mahomes marks the first time the previous two Super Bowl-winning QBs face off in the next Super Bowl. Brady won in 2018, as the Patriots beat the Rams. Mahomes and the Chiefs topped the 49ers in 2019.

Brady, who already owns an NFL-record six Super Bowl rings, would become the first player to ever win seven NFL championships with a victory in Super Bowl LV.

Kansas City quarterback Patrick Mahomes, who won Super Bowl MVP in the Chiefs' last title, is looking to become the youngest QB in NFL history to win multiple Super Bowls. He won in 2019 at age 24.

Andy Reid and Bruce Arians have only coached two games against each other, with each claiming one win. Both games were three-point contests.

This will be Arians' first Super Bowl appearance as a head coach. He made the big game three times with the Steelers, first as wide receivers coach (2005) and then as offensive coordinator (2008, 2010). Pittsburgh went 2-1 in those Super Bowls.

Reid will be making his fifth Super Bowl appearance and third as a head coach. He won with the Packers in 1996 as an assistant offensive line and tight ends coach, then appeared in Green Bay's return bid in 1997 as QBs coach and assistant head coach. He narrowly lost to the Patriots as the Eagles' head coach in 2004, then won his first as a head coach with the Chiefs in 2019.

Sarah Thomas will become the first woman to officiate during a Super Bowl. A veteran of six NFL seasons, she will serve as the down judge.

Amanda Gorman, the 22-year-old poet who appeared at the presidential inauguration, will recite a new poem before the game to recognize three honorary captains for showing leadership in their communities during the pandemic.

Enjoy Super Bowl LV! When you have questions about your insurance, we are here for you.