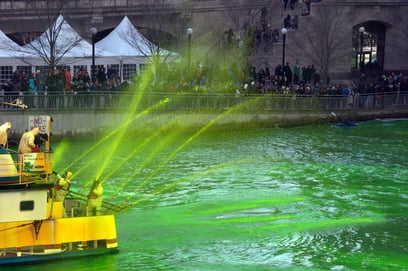 Today is a great day to wear green and celebrate St. Patrick.  While it’s an Irish holiday, in our research we found that the first St. Patrick’s Day parade was held in Boston in 1737.  Here’s some history and interesting background on St. Patrick’s Day.

What is St. Patrick's Day?

St. Patrick's Day is the feast day of St. Patrick, who is the patron saint of Ireland. In addition to its religious roots, the holiday has become synonymous with the color green, shamrocks and festive drinking.

Who Was St. Patrick?

St. Patrick was a Christian missionary who converted the Irish people to Christianity.

He was born in Britain in 385 AD and brought to Ireland as a slave when he was 16. Six years later, he escaped to a French monastery, became a priest and returned to Ireland to spread the teachings of Christianity.

In the centuries following Patrick’s death (believed to have been on March 17, 461), the mythology surrounding his life became ever more ingrained in the Irish culture.  Legend says that he also drove the snakes out of Ireland. However, biologists say there were never any snakes in Ireland in the first place.

How is St. Patrick’s Day Celebrated?

St. Patrick's Day is primarily celebrated as a religious holiday in Ireland. Banks, stores and businesses shut down for the national holiday. Traditionally, the Irish go to church in the morning and pray for missionaries. Drinking, dancing and music are also part of the festivities later in the day.

Today, there are huge parades in New York City, Chicago and Savannah, Georgia, as well. In Chicago the celebration centers on the annual dyeing of the Chicago River green. The practice started in 1962, when city pollution-control workers used dyes to trace illegal sewage discharges and realized that the green dye might provide a unique way to celebrate the holiday. That year, they released 100 pounds of green vegetable dye into the river–enough to keep it green for a week. Today, in order to minimize environmental damage, only 40 pounds of dye are used, and the river turns green for only several hours.

Why are there shamrocks everywhere?

Legend has it that St. Patrick used a three-leaf clover, otherwise known as a shamrock, to explain the concept of the Holy Trinity to pagans. Shamrocks are also the national flower/emblem of Ireland.

Why is everything green?

The color green is a nod to Ireland's nickname, the Emerald Isle.

Wearing green on St. Patrick's Day is supposed to prevent you from getting pinched by a leprechaun. Leprechauns are tricky mythical fairies in Irish folklore who like to pinch anyone in sight. However, legend says that wearing green makes you invisible to these feisty creatures.

The color is also politically symbolic. Green is associated with the Irish nationalist movement against the English crown in the 1600s. And when Irish immigrants came to America, they wore green to show pride for their home country.

Have a great St. Patrick’s Day!  We are here for you when you have questions about your insurance, would like to review your policies, or need some advice.