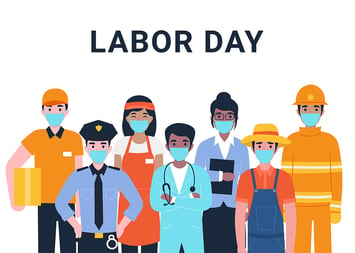 The first Monday in September, Labor Day, means so many different things to our country’s people. In this year’s Covid-19 world, Labor Day still signals the end of summer and a return to school for our children. Our usual barbeques, fireworks, concerts, and parties will be dialed back from last year’s boisterous celebrations as we social diatance, wear masks, and stay safe.

Let’s take a look at the history of Labor Day.

According to the U.S. Department of Labor, “Labor Day is a creation of the labor movement and is dedicated to the social and economic achievements of American workers. It constitutes a yearly national tribute to the contributions workers have made to the strength, prosperity, and well-being of our country.”

Labor Day holiday history is complex and dramatic than most might realize, starting with a heated campaign by workers in the late 19th century to win support and recognition for their contributions.

On September 5, 1882, some 10,000 to 20,000 people joined a parade through Lower Manhattan, organized by New York City’s Central Labor Union. "The windows and roofs and even the lamp posts and awning frames were occupied by persons anxious to get a good view of the first parade in New York of workingmen of all trades united in one organization," reported the New York Tribune of that first Labor Day celebration.

Throughout the 1880s, labor strikes became increasingly common, with workers protesting their long hours and difficult, sometimes even dangerous, working conditions. In May 1886, the growing tensions between labor and capital exploded into violence during a protest rally in Chicago’s Haymarket Square. Eight anarchists were eventually convicted on murder charges and four were executed.

In 1893, during a nationwide economic recession, George Pullman laid off hundreds of employees and cut wages for many of the remaining workers at his namesake railroad sleeping car company by some 30 percent.

Angry Pullman workers walked out in May 1894, and the following month, the American Railway Union (ARU) and its leader, Eugene V. Debs, declared a sympathy boycott of all trains using Pullman cars effectively halting rail traffic and commerce in 27 states from Chicago to the west coast.

Even as Pullman Company and railroad workers were striking, Congress passed legislation in June 1894 making the first Monday in September a federal legal holiday to recognize and celebrate labor. Cleveland signed the bill into law June 28, 1894, a few days before sending federal troops to Chicago.

The credit for founding Labor Day is still under debate. One choice is Peter J. McGuire, the general secretary of the Brotherhood of Carpenters and Joiners and co-founder of the American Federation of Labor. Matthew Maguire, the secretary of Local 344 of the International Association of Machinists in Paterson, N.J., is the favorite contender based on recent research.

As with many national holidays, the celebration of Labor Day began in the individual states. The first state bill was introduced into the New York Legislature, and the first to become law was passed by Oregon on February 21, 1887. During that year four more states – Colorado, Massachusetts, New Jersey, and New York - created the Labor Day holiday by legislative enactment. By 1894, 23 more states had adopted the holiday. On June 28, 1894, Congress passed an act making the first Monday in September of each year a legal holiday.

As you celebrate Labor Day this year, we hope that social distancing, wearing masks, and staying safe will prevail.

When you have questions about your insurance, we’re here with the answers.  We are looking forward to talking with you.