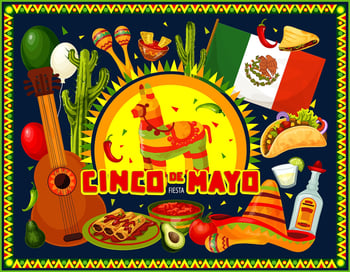 Today most of us associate great Mexican food and even better margaritas with celebrating Cinco de Mayo.   For a little background, we’re bringing you a look at the history of this holiday.

While it is a relatively minor holiday in Mexico, in the United States, Cinco de Mayo has evolved into a commemoration of Mexican culture and heritage, particularly in areas with large Mexican-American populations.

This tale begins as a part of the aftermath of The Mexican-American War and The Reform War nearly bankrupting the Mexican Treasury. On July 17, 1861, Mexican President Benito Juárez issued a moratorium in which all foreign debt payments would be suspended for two years. In response, Britain, France, and Spain sent naval forces to Veracruz to demand reimbursement. Britain and Spain negotiated with Mexico and withdrew.  France, at the time ruled by Napoleon III, decided to use the opportunity to establish an empire in Mexico that would favor French interests.

Late in 1861, a well-armed French fleet attacked Veracruz, landing a large French force of 8,000 and driving President Juárez and his government into retreat. Moving on from Veracruz towards Mexico City, the French army encountered heavy resistance from the Mexicans close to Puebla. The French army attacked the poorly equipped Mexican army of 4,000. On May 5, 1862, the Mexicans decisively defeated the French army. The victory represented a significant morale boost to the Mexican army and the Mexican people at large and helped establish a sense of national unity and patriotism.

Unfortunately, a year later the French returned with 30,000 troops. The French were able to defeat the Mexican army, capture Mexico City, and install Emperor Maximilian as ruler of Mexico.

The French victory was itself short-lived, lasting only three years, from 1864 to 1867. By 1865, following the end of the American Civil War, the United States began to provide more political and military assistance to Mexico to expel the French. During that time Napoleon III was facing a persistent Mexican guerilla resistance, the threat of war with Prussia, and the prospect of a serious scrap with the United States.  Napoleon retreated from Mexico starting in 1866.

On June 5, 1867, Benito Juárez finally entered Mexico City where he installed a new government and reorganized his administration.

We wish you a happy Cinco de Mayo. When you have questions about insurance please call us.  We promise to give you straight answers and solid recommendations.