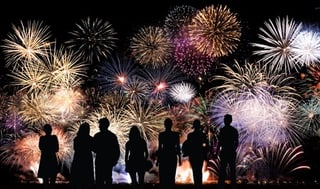 Americans take their holidays seriously and one of the most celebrated, unique American holiday is the 4th of July or Independence Day.  While we’ve been celebrating the date since July 4, 1776, the holiday finally became official when it was declared a federal holiday in 1941.

In June 1776, representatives of the 13 colonies then fighting in the revolutionary struggle weighed a resolution that would declare their independence from Great Britain. On July 2nd, the Continental Congress voted in favor of independence, and two days later its delegates adopted the Declaration of Independence, a historic document drafted by Thomas Jefferson. From 1776 until the present day, July 4th has been celebrated as the birth of American independence, with typical festivities ranging from fireworks, parades and concerts to more casual family gatherings and barbecues.

Philadelphia held the first annual commemoration of independence on July 4, 1777, while Congress was still occupied with the ongoing war. George Washington issued double rations of rum to all his soldiers to mark the anniversary of independence in 1778, and in 1781, several months before the key American victory at Yorktown, Massachusetts became the first state to make July 4th an official state holiday.

In 1870, the U.S. Congress made July 4th a federal holiday; in 1941, the provision was expanded to grant a paid holiday to all federal employees. Over the years, the political importance of the holiday would decline, but Independence Day remained an important national holiday and a symbol of patriotism.  Falling in mid-summer, the Fourth of July has since the late 19th century become a major focus of leisure activities and a common occasion for family get-togethers, often involving fireworks and outdoor barbecues. The most common symbol of the holiday is the American flag, and a common musical accompaniment is “The Star-Spangled Banner,” the national anthem of the United States.

One thing for sure, when we celebrate Independence Day there better Be some fireworks involved.  Our ancestors used their cannons to make some noise for the early celebrations.  After the cannons were retired in the late 19th century, fireworks were used for both noise and their beauty.

Who has the best fireworks?

Based on current research, the single best firework display on July 4 is indisputably New York presented by Macy’s for the 40th year.  Sources fall apart in their rankings after agreeing on New York.  In the Top 4, Boston with their Pops concert and fireworks, Washington, DC, and San Diego are almost always included.

We wish you a 4th of July filled with laughter, family, friends, patriotism, and a deep appreciation for our country.

We’ll be back in our office on Tuesday, so if you have questions about your insurance, please call us.